WP Holding’s EBITDA shot up by nearly 54%. Through its subsidiary Wakacje.pl, Wirtualna Polska acquired MyTravel, implementing the next stage of its e-commerce strategy. The Group is prepared for the introduction of GDPR.


Comparing the first quarters of 2018 and 2017, cash revenues on the sale of services in the online segment increased by 17.4% (PLN 16.4 million). EBITDA of the online and TV segments in Q1 amounted to PLN 32 million, increasing 54% year over year. The increase in revenues also translated into an increase in Grupa WP’s total profit. Net profit grew by 179% and exceeded PLN 8.3 million.

The table below presents the highlights of the consolidated statement of financial result for the first quarter of 2018 and 2017: 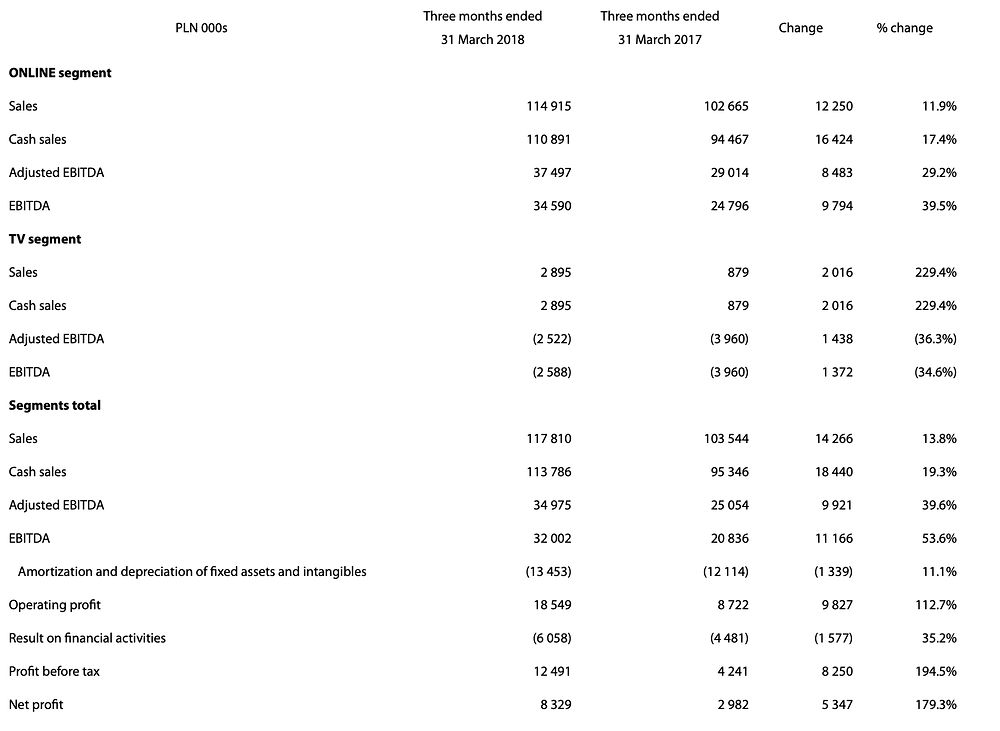 – In terms of the growth rate of profits on the EBITDA level, this was the best quarter for 4 years. Investments in e-commerce, viewability of commercials and WP marketing cloud paid off – says Jacek Świderski, CEO of WP Holding SA.
In Q1 2018, the Wirtualna Polska Holding Group acquired further 35% shares in Domodi. The transaction value exceeded PLN 85 million. The Domodi Group is made up of three leading marketplaces in the Polish Internet in the fashion, house and interior design categories.

On 17 May, WP Holding’s subsidiary, Wakacje.pl, bought a network of franchise travel agencies My Travel. The amount of the investment will range from PLN 10 to 19 million and will depend on My Travel’s financial performance for 2018. It is estimated that the ROPO (Research Online Purchase Offline) effect amounts to approx. 60%. The purchase of the My Travel network fits Wirtualna Polska’s e-commerce development strategy and which will additionally strengthen offline sales.

The last months also marked WP achieving the leader position among media groups in the Polish Internet. According to the latest results of the Gemius/PBI survey, in April 2018, all Grupa WP services were visited by 20.9 million real users, who spend 124 million hours there and performed 2.8 billion hits. The average time per user was as much as 5 hours and 56 minutes. Grupa WP is also a leader of average daily results, which constitute a precious source of knowledge for planning short-term campaigns. In April 2018, its services were visited daily by nearly 6.4 million real users. The average time per user was 38 minutes and, once again, this is the best result among all media groups in the Polish Internet.

During this time Grupa WP was intensively preparing for the implementation of GDPR and was one of the first to start to collect the required consents from the users. The amended law sorts out the question of personal data protection and allows for better detection of fraud and abuse. In accordance with the data of 21 May 2018, already 75% WP Media users have given their consent.

Grupa WP also develops the WP marketing cloud tool, launched by the end of last year, which, using special algorithms, allows for better matching of advertisements to the user. It offers better control over conducted campaigns and is fully compliant with the General Data Protection Regulation. Already 76% of e-commerce campaigns are conducted using this tool.

Wirtualna Polska is a group of companies operating in the media and e-commerce sectors. The WP Group owns the Wirtualna Polska horizontal portal. It also operates the o2 portal and various specialized websites, such as Money.pl, WP SportoweFakty, WP abcZdrowie and Dobreprogramy.pl. In the e-commerce industry, WP Group is active in the tourism, fashion, interior design, financial services and healthcare sectors.