In 2015 Wirtualna Polska Holding (WPL) completed all the intended acquisitions at attractive valuations. It spent the proceeds from the stock market according to the objectives of its rights offering. After its acquisition of Wakacje.pl in December it is now the leader in four marketplace categories: clothing (Domodi.pl/ Allani.pl), interior decoration (Homebook.pl), financial services (Money.pl) and travel (Wakacje.pl). WPL ended the year with very robust financial performance. The Group’s consolidated revenues on the sales of services shot up 31% to PLN 326 million. Its adjusted EBITDA was PLN 108 million, up by more than 28% over 2014.


2015 was a time of very significant change in the Group associated with its policy of steadfastly pursuing internet market consolidation in Poland and augmenting its rate of return by utilizing the Group’s data resources and big data tools.

Wirtualna Polska Holding S.A. went public on the Warsaw Stock Exchange on 7 May 2015 with its floatation being preceded by an initial public offering of shares worth PLN 294.2 million. WPL received proceeds of PLN 106 million which, according to its intentions, the company largely earmarked for acquisitions.

“Our IPO was a wonderful opportunity to demonstrate to the world the potential the new Wirtualna Polska has to offer after 18 months of re-engineering. From that time, we have unwaveringly built the Group’s position. We have diametrically improved how WP is perceived, we have received a concession to broadcast WP1, and every month more than 18 million Poles use our services. We attained the goal we articulated two years ago of building our position as the partner of first choice for advertisers, generating organic revenue growth of 75% in this period. This is seldom seen on such a mature market and in such a mature company”, says Jacek Świderski, CEO of Wirtualna Polska Holding S.A. “We also carried out targeted acquisitions, which brought us considerably closer to achieving our strategic objective of having the Group generate 50% of its revenues and EBITDA from the e-commerce market. In 2016 we will continue to pursue our “MoViBE” strategy: mobile, video, big data and e-commerce. We believe that on top of developing video advertising and winning television budgets, mobile will be the most rapidly growing part of our business”, he adds.

The Group’s 2015 consolidated revenues shot up PLN 77 million (31%) to PLN 326million. In turn, cash sales revenues of PLN 286 million were up 32%compared to the pro forma sales revenues in the analogous period of 2014. The EBITDA earned by the Group was up PLN 43 million to PLN 94 million while adjusted EBITDA climbed 28% yoy to PLN 108 million. The acquisitions of players active in web advertising and e-commerce, including the generation of leads on the e-commerce market made a considerable contribution to the growth in the Group’s revenues and EBITDA. In 2015 consolidated net profit was PLN 5.8 million.

“The Group’s 2015 financial performance was in line with our expectations, forming the outcome of consistently pursuing our strategy”, remarks Elżbieta Bujniewicz-Belka, CFO and Management Board Member of Wirtualna Polska Holding S.A. “Our business model features a high operating return resulting from the positive impact exerted by the revenue and cost synergies associated with the acquisitions executed by the Group in 2014 and 2015.”

The sales revenues posted by WPL in Q4 2015 were PLN 102 million, which when compared with the pro forma sales revenues for the analogous period in 2014 represents 35% growth. During this period cash revenues stood at PLN 89 million, i.e. they were up by nearly 40%. 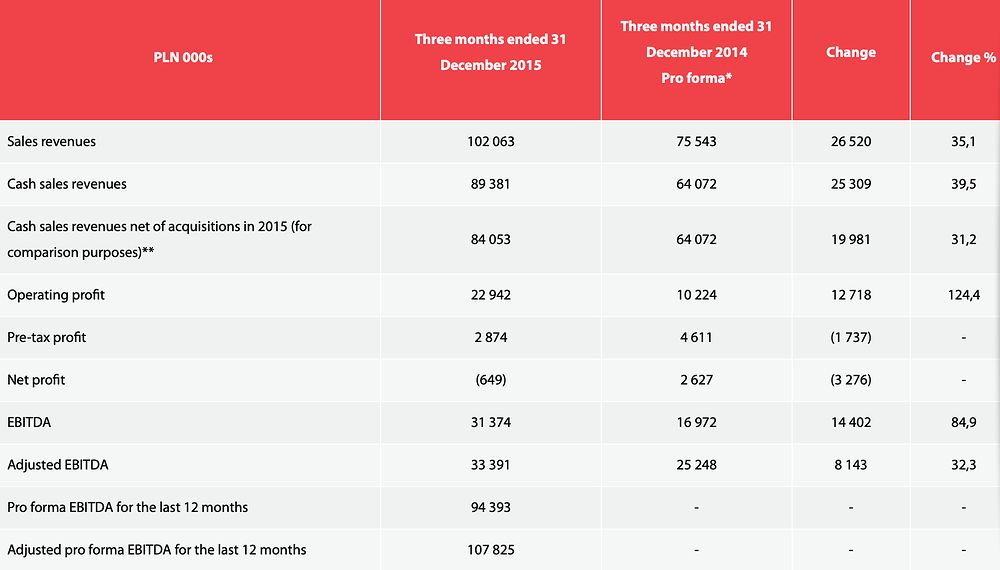 After removing the impact from the 2015 revenues exerted by the acquisitions completed in 2015 whose results are not recognized in the comparison pro forma data, cash revenues were up 28%(PLN 278 million) over the entire period and 31%in Q4 alone (PLN 84 million).

WP Group is the market leader

Continuing the acquisitions launched in 2014 the Wirtualna Polska Group in 2015 acquired the following companies: NextWeb Media Sp. z o.o., Finansowysupermarket.pl Sp. z o.o., Allani Sp. z o.o. and Enovatis S.A., the owner of the popular tourism portals Wakacje.pl and Easygo.pl. These acquisitions extended the Group’s competences and increased the magnitude of its business while also contributing to it becoming the leader in four marketplace categories with good prospects: clothing, interior decoration, financial services and travel.

According to its growth strategy in 2015 Wirtualna Polska also pursued with determination its overriding objective of becoming the main news, cultural and entertainment medium in Poland, by providing internet users attractive and useful content and innovative services customized to their changing needs. According to the data reported by Megapanel PBI / Gemius for December 2015 the Group ended the year as the leader of internet portals according to all the fundamental indicators: reach (74%), number of users (Real Users, 18.1 million), total number of domestic hits (3.6 billion hits) and mobile hits (930 million mobile hits) and the average time spent in the portal per user (5 hours and 40 minutes per month*).

Additionally, also according to the data from Megapanel, the Group took first place in Poland in the topical categories of „Business, finance and law”, „Communication”, „New technology” and „Lifestyle”. The Group also has the largest number of e-mail users in Poland, which according to the Megapanel PBI / Gemius research as of December 2015 was 8.8 million real users.

In 2015 Wirtualna Polska Holding S.A. received two prestigious distinctions – Best IPO Award and Top IPO of 2015. East Capital, a company specializing in asset management on emerging markets recognized the floatation of Wirtualna Polska Holding S.A. as being the best IPO in Eastern Europe in 2015. According to East Capital, Wirtualna Polska conducted the best initial public offering in the region. The jury conferring the award drew attention to the fact that the per share valuation after the first day of being listed climbed a full 10% over the issue price in the initial public offering and that from the time of its floatation on the Warsaw Stock Exchange, WPH’s share price has surged upward 24%, beating the WIG stock exchange index by some 33%. The East Capital Awards for outstanding firms were conferred for the twelfth time. The Company also received the title of TOP IPO 2015 in the first edition of this contest at the gala for the CEE Capital Markets Awards at which the best public companies listed in Central and Eastern Europe were distinguished.

The Group owns one of Poland’s two most popular horizontal internet portals called Wirtualna Polska. It also runs the o2 horizontal portal and numerous specialist vertical portals, including in particular the business portals Money.pl and Biztok; new technology portals: e.g. Dobreprogramy; sports portals: e.g. Sportowe Fakty; entertainment portals: e.g. Pudelek; health and parenting portals: abcZdrowie.pl and Parenting.pl; and internet radio stations: OpenFM and PolskaStacja. In addition, the Group runs its advertising business offering lead generation for internet stores, mostly through portals that aggregate the offers of internet stores (marketplace), in particular Domodi and Allani in fashion, Homebook in the home and interior decoration category, Money.pl and Finansowysupermarket.pl in finncial services and wakacje.pl in tourism and recreation. The Group offers its users the possibility of using e-mail free of charge; it also conducts business on the Polish online advertising market offering its clients an extensive range of advertising products: modern display, including video advertising, advertisements distributed by e-mail, advertising for mobile devices and advertising based on a performance model.