Wirtualna Polska Holding S.A. records an 18% increase in cash revenues in the Online Segment in Q1 2017


In Q1 2017, the increase in Wirtualna Polska Holding’s cash sales revenues in the Online Segment exceeded 18% and the adjusted EBITDA result rose 12%.

The table below presents the main line items of the statement of financial result for the first 3 months of 2017 and 2016. 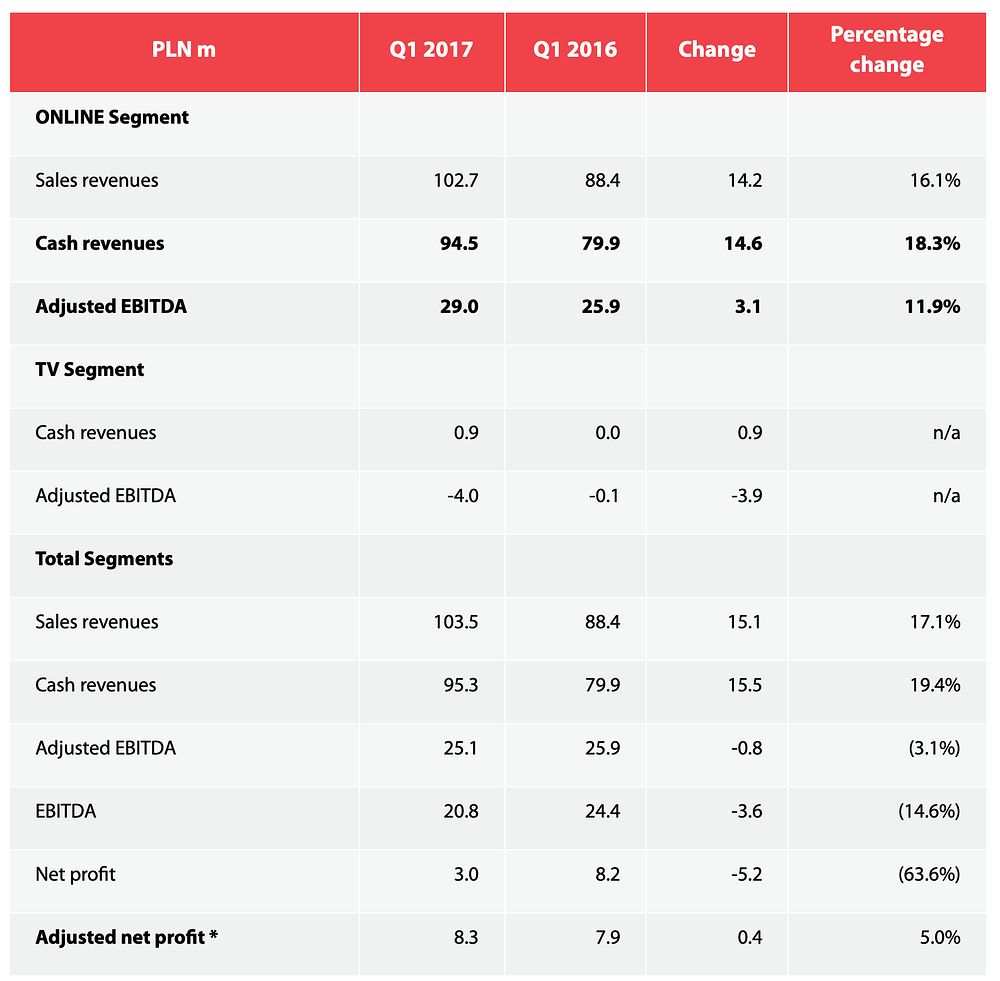 We are happy with the financial performance of the Online Segment which continues to record an increase in cash revenues in another quarter; this time in yoy terms the revenues grew by over 18% and adjusted EBITDA profit rose by nearly 12%. It’s now two years since WP has been listed on the stock exchange. During this period the Company’s revenues rose by 52%, EBITDA by 35%, and the share price by 55%* – sums up Jacek Świderski, President of the Management Board of Wirtualna Polska Holding S.A.

Revenues on the sale of the Group’s services in the first 3 months of 2017 increased by over 17% to PLN 103.5 million. Cash sales revenues, in turn, stood at PLN 95 million, and were over 19% higher compared to the sales revenues in the corresponding period of 2016.

Revenues on the sale of services in the Online Segment increased in the first 3 months of 2017 by over 16% to PLN 103 million, compared to the sales revenues in this period last year, and the corresponding increase in cash revenues exceeded 18%, up PLN 94 million. In the first quarter of 2017, the Segment generated PLN 29 million in adjusted EBITDA, up by nearly 12%, compared to the first 3 months of the year before.

In the first quarter of 2017 the Group’s total results were largely affected by the high costs associated with developing the WP Television launched in December 2016. The TV project is at an early stage of development and consequently the expenditures currently incurred on the development of this segment exceed the generated revenues. During the first 3 months of 2017 the TV Segment generated a negative EBITDA in the amount of less than PLN 4 million, as a result of which the Group’s total adjusted EBITDA amounted to PLN 25 million.

We are happy that in April 2017 Telewizja WP recorded an over 60% higher share in the viewing rates in the commercial group (all 1649) than in the previous month and last week we ranked first among all MUX8 stations in cable TV. These are the first effects of the work of the new team managing the station and all those involved in the project - explains Jacek Świderski.
EBITDA for Q1 2017 stood at PLN 20.8 million and was PLN 3.6 million lower than in the corresponding period of 2016, which resulted largely from the different temporary result on barter transactions (PLN -2.7 million loss in Q1 2017 vs. PLN 380 thousand profit in Q1 of the previous year).

The Q1 result is charged with the shifts in recognition of barter revenues and costs of the advertising campaigns between the quarters which are settled over a longer period of time without affecting the result. This means that they may show transitional positive or negative results. We expect that we will earn revenues on these transactions in the coming settlement periods - explains Elżbieta Bujniewicz-Belka, Management Board Member, CFO, Wirtualna Polska Holding S.A.