Wirtualna Polska Holding (WPL, Company) reported excellent financial results in the second quarter of 2015 along with considerable increases in all business areas. The Company has continued the process of acquisitions started last year, and just a month after its IPO invested in another companies: OpenFM, PolskaStacja.pl and NextWeb Media Sp. z o.o (publisher of abcZdrowie.pl website). Thanks to those transactions WPL has become a major player in the Internet radio segment and has significantly strengthened its position in the growing categories: "Health & Medicine" and "Parenting". The Group, being the leader among Polish web portals (according to Megapanel PBI/ Gemius data from June 2015), is consequently and successfully executing its earlier communicated strategy.

The company’s growth rate is reflected in its financial results. In the second quarter of 2015 the company recorded revenues from sales of services higher by 31.9% than pro forma sales in a corresponding period of 2014. Simultaneously, cash proceeds (revenues excluding barter transactions) increased by 32.1%. Adjusted EBITDA rose by 32.8%, compared to the pro forma adjusted EBITDA in the second quarter of 2014. The Group’s net profit increased six-fold, to PLN 10.1 million.

Growth in cash proceeds in first half of 2015 was higher by 29.07% than the pro forma sales in a corresponding period of 2014. The Group’s adjusted EBITDA amounted to PLN 49.3 million, representing an increase of 36% compared to the pro forma adjusted EBITDA in the first half of 2014. At the same time the transaction and restructuring costs were PLN 10.5 million lower, whereas net profit for this period reached PLN 9.6 million. 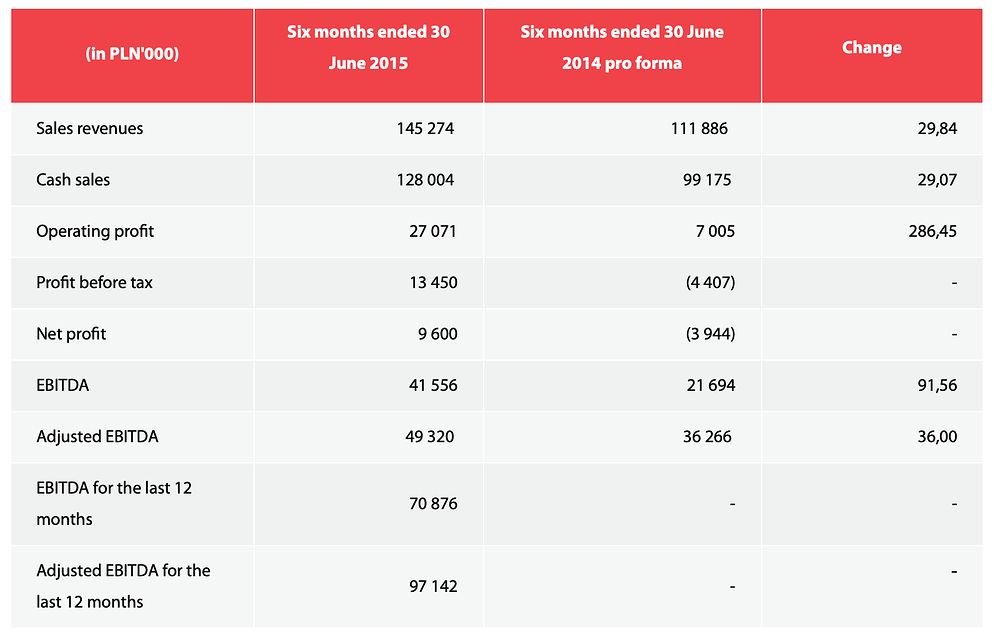 We owe a considerable increase in EBITDA and profit – just as it was in the first quarter - to growth in revenues and ability to keep the rate of costs increase low as well as to exploiting the operating leverage and economies of scale - explains Elżbieta Bujniewicz-Belka, CFO of Wirtualna Polska Holding S.A. We are recording growth in all business areas - she added.

In 2014 Wirtualna Polska acquired several leading companies operating in the Internet advertising and e-commerce market. The Company invested, among others, in Domodi Sp. z o.o and Money.pl, as well as Sportowe Fakty. The acquisitions led to improved market position of the Group as well as to higher revenues.

The company’s IPO in May 2015 brought Wirtualna Polska the expected proceeds of PLN 106.9 million, out of which PLN 20 million has already been used towards bank debt repayment and PLN 24.5 million was spent on acquisitions. Continuing its M&A strategy started last year, in May 2015, Wirtualna Polska acquired two independent Internet radio platforms: OpenFM and PolskaStacja.pl, becoming the leader in the Internet radio segment – a segment with one of the highest content consumption time per user.

In June 2015, it purchased 100% shares in NextWeb Media Group, publisher of websites abcZdrowie.pl and Parenting.pl as well as creator of a blogging platform Blomedia.pl. This acquisition helped the Group to significantly expand its offer for advertisers. Moreover, it strengthened the position of Wirtualna Polska in the popular categories such as “Health & Medicine” and “Parenting”.

According to the adopted development strategy, Wirtualna Polska intends to consequently pursue its overarching goal of becoming the leading news, lifestyle and entertainment medium in Poland by providing attractive content to Internet users, as well as useful and innovative services tailored to their changing needs.