In 2018 Wirtualna Polska Holding S.A. generated cash sales topping PLN 542 million. Its profit skyrocketed by 90% versus 2017 to nearly PLN 76 million. WP TV reached the break-even point and it was in the black for the entire fourth quarter of last year. Wirtualna Polska continues to pursue its e-commerce growth strategy; the Group has made several significant acquisitions in tourism, home design and the automotive sector.


For the first time in its history Wirtualna Polska’s cash sales surpassed PLN 542 million. Its net profit also broke the record by coming in at nearly PLN 76 million with adjusted EBITDA of PLN 173 million.

- During the four years that have transpired since the acquisition of WP, the number of citizens of Wirtualna Polska employed in Gdańsk, Warsaw, Wrocław and Lublin has quadrupled. EBITDA has also quadrupled. Poland has a centuries-old hunger for a digital transformation, and it is very open to that. Wirtualna Polska, just as has been the case until now, does not intend to stand on the sidelines. Playing the role of a chronicler is not enough for us. We have a mission, ambition and the daring to partner in the creation of a new digital Poland - says Jacek Świderski, CEO of Wirtualna Polska Holding S.A.

The following table presents the main positions of the income statement for the year ending 2018 and 2017. 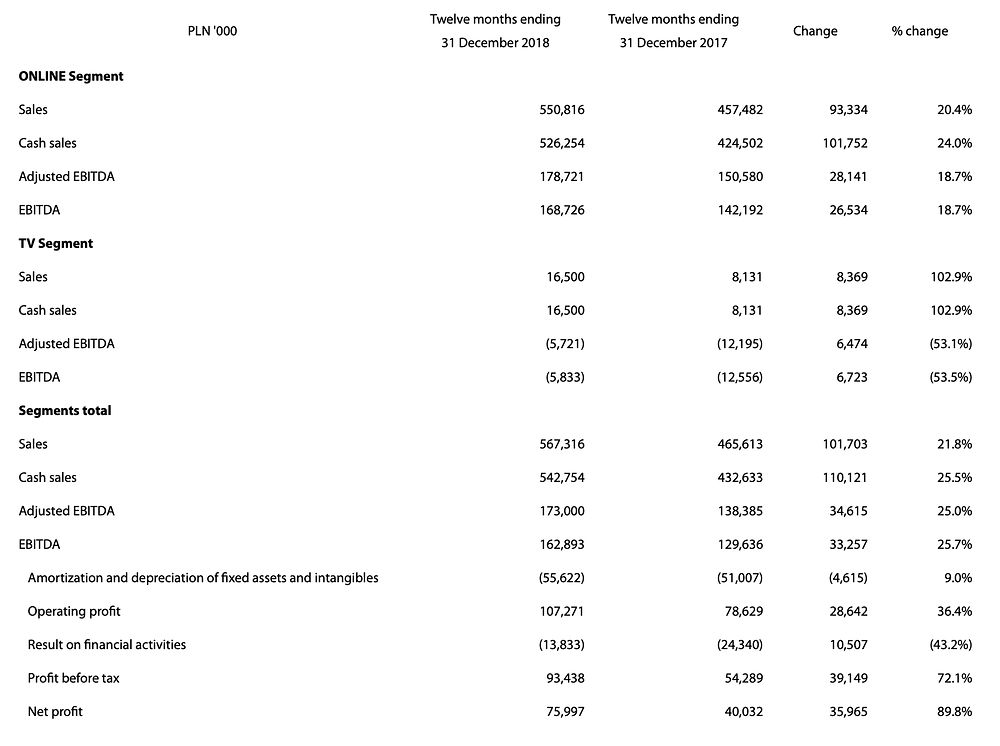 - We have had an exceptionally great year in the media and in our e-commerce companies. We are elated with our results and the trust our users and investors have placed in us. The Group is developing not just through acquisitions but also thanks to constant organic growth. If the impact exerted by acquisitions in 2018 is netted out, cash sales rose by 21% and EBITDA by 23%” - says Elżbieta Bujniewicz-Belka, CFO of Wirtualna Polska Holding S.A.

In 2018 WP TV was the leader among terrestrial TV stations operating on MUX8 with a 0.40% share of the commercial group. Increasingly better viewership results contributed to reaching the break-even point. Its plan had called for WP TV to generate a profit for just one month, while it managed to be in the black for the entire fourth quarter of last year. WP TV’s sales revenues in 2018 totaled PLN 16.5 million, having doubled since one year ago.

Proceeds from the WP Group’s e-mail services are also climbing rapidly, with more than 10 million users every month, the most among Polish e-mail services. In December the migration of e-mail services "WP Poczta" and "Poczta o2" to a new system was concluded, while at the same time the number of daily users of this service trended up by more than 10%. Recently, WP’s mail services were the first in Poland to launch a service to pay bills directly from people’s e-mail boxes. More functionalities to facilitate the management of people’s daily affairs and duties are in the works.

The WP Group continued to follow its e-commerce growth strategy in 2018. The company acquired the remaining equity stake in the Domodi Group, thereby becoming the sole owner. In subsequent months Wirtualna Polska purchased the following companies: My Travel, Parklot and Wakacyjny Świat (tourism), Extradom (home design) and became the majority shareholder of Superauto24.com. Wirtualna Polska Holding also acquired a 13% equity stake in Teroplan S.A., the owner of the e-podróżnik.pl service in March of 2019. 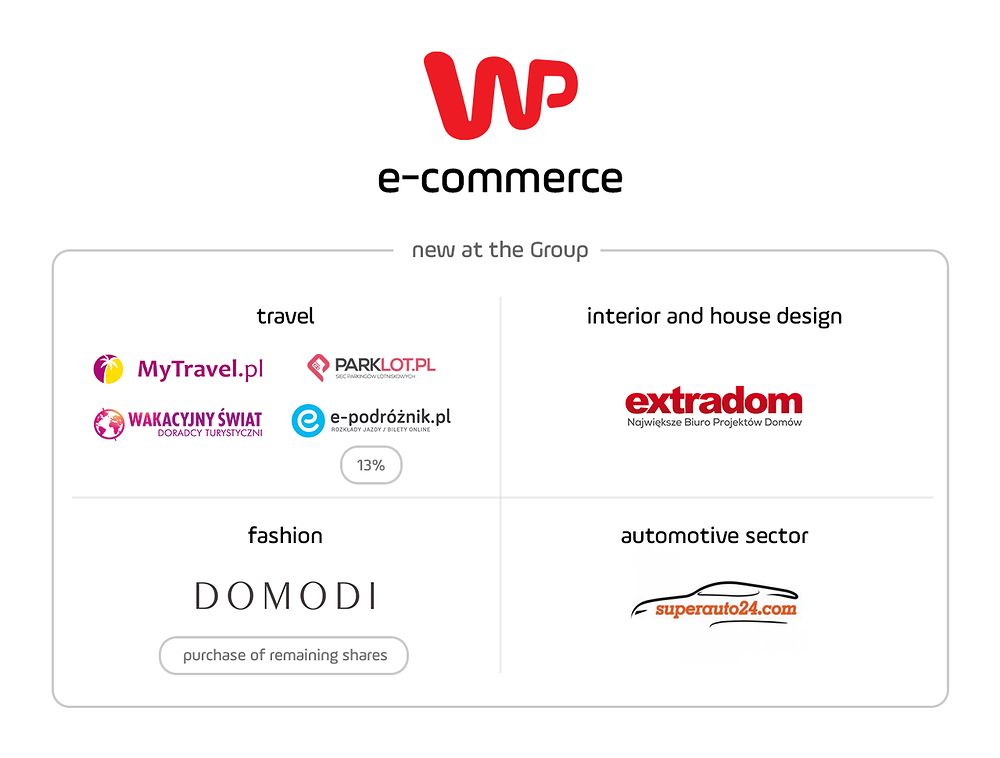 Wirtualna Polska is a media and e-commerce holding group. It owns the WP horizontal portal and it also operates specialized topical websites such as money.pl, WP SportoweFakty and WP abcZdrowie. In the e-commerce industry, WP is active in the tourism, fashion, interior and home design, financial services and automotive sectors. According to a Gemius/PBI survey, more than 22 million Poles used WP’s internet products in February 2019.