In the first quarter of 2015 Wirtualna Polska Holding SA (WPL) reached PLN 67,5 million in sales revenues, a 27,6% increase year over year on a fully comparable pro forma basis. This successful quarter was the result of the longer term commitment to strengthening the brand perception, investments in opinion leading content and smooth process of integration with the acquired companies.


Within just over a year from acquiring Wirtualna Polska, we have completed the complex integration process, completely revamped the company’s brand perception, increasing the value of the company threefold. We have proven that a change on the leadership position in internet media in Poland is possible. While we were reorganizing the Group internally, working on a renewed product offer for our Customers, we have prepared the Company to go public, and today we can be proud of the growth rate we have reached, which is far above the market levels –– says Jacek Świderski, CEO of Wirtualna Polska Holding SA.

The following table presents selected financial data for the three months ending March 31, 2015 and March 31, 2014. Since the Group has grown significantly through acquisitions, in order to make the year over year comparison possible, the Management Board decided to present pro forma financial results for the period from January 1, to March 31, 2014. This pro forma information has been prepared based on the same assumptions as presented for the whole year of 2014 in the Prospectus. 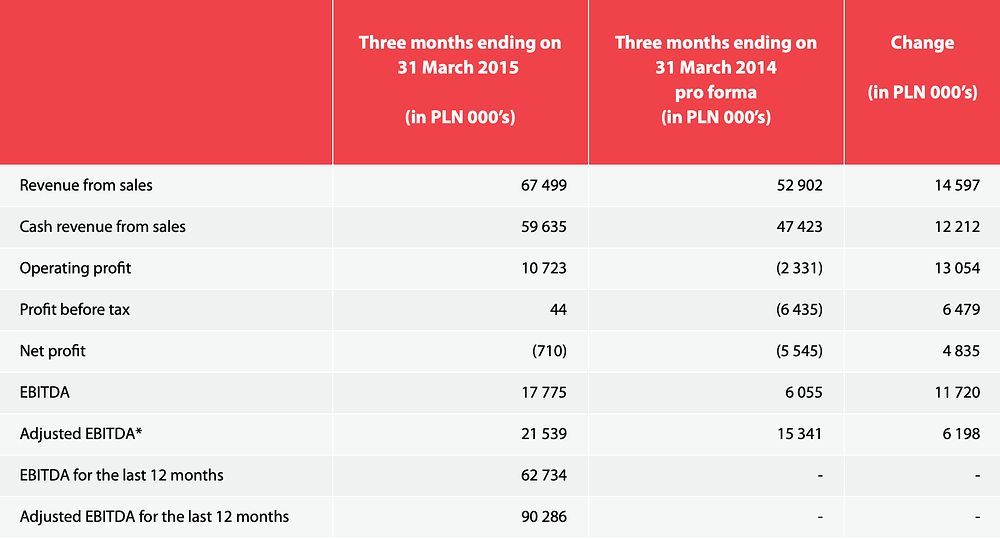 *Adjusted EBITDA is calculated as EBITDA adjusted for one-off events such as: costs of transaction advice and initial public offering, restructuring costs, costs of the management option scheme, result on disposal of other financial assets, net result of settlement of barter transactions and revaluation and scrapping of non-current assets.

Also, relatively low transaction and restructuring costs contributed to improving the Group's financial indicators. In the first quarter of 2015 they were PLN 9.1 million lower than they had been in the respective period one year ago.
Other factors and events affecting the results

Material acquisitions made by the Group in prior periods

In the prior year the Group acquired other entities operating on the internet advertising and e-commerce markets, including generating leads on the e-commerce market. The Group acquired shares in Wirtualna Polska SA, Domodi Sp. z o.o. and Money.pl, as well as an organized part of the enterprise Sportowe Fakty. The acquisitions referred to above had a significant impact on the increase in Group revenues and EBITDA compared with the same period of the prior year.

Having a large number of service and content users gives the Group access to information on user behaviour, within the limits set by the provisions of the law. Thanks to access to a large amount of data on user behaviour (in particular on content and services used by users) and the progress in possibilities of analysing extensive data resources, which was made in recent years (big data analytics tools), the Group has significant potential for increasing its operating effectiveness, among other things, through the personalization of content planned for 2015, and personalization of advertisements which are more effective, by eliminating the advertisements of products in which a given user is not interested. Increasing the effectiveness of the personalization of advertisements consists, among other things, of increasing the number of clicks on the advertisements as a result of displaying them to the users. A larger number of clicks on an advertisement enables the Group to earn higher revenue in the event of settlements according to the effectiveness model.

Borrowings related to the acquisition of Wirtualna Polska and further acquisitions

To partly finance the acquisition of Wirtualna Polska SA (currently WP Shopping Sp. z o.o.) made on February 13, 2014 and the Group’s further acquisitions, the Group concluded a loan agreement based on which it was granted loans in the total amount of up to PLN 270 million, of which PLN 175 million was earmarked for the purchase of Wirtualna Polska. The remaining part of the purchase price of Wirtualna Polska SA was financed with funds paid in to the Group by European Media Holding SARL in the form of a capital increase. On 19 September the Group used another tranche of the loan of PLN 1.8 million to develop technical infrastructure. On December 1, and 12, 2014 the Group used the loan tranche of PLN 47.0 million to purchase shares in Money Sp. z o.o. and its subsidiaries, and PLN 3.3 million to develop technical infrastructure. As at March 31, 2015 the amount due in respect of the loan agreement was PLN 211 million.

On March 24, 2015, Grupa Wirtualna Polska Sp. z o.o. terminated the previous loan agreement concluded with Bank Pekao and ING Bank Śląski on December 12, 2013. Due to the early termination of the agreement the Group was obliged to pay prepayment fee on early repayment in the amount of PLN 2.0 million. The respective finance costs were recognized in the period ended March 31, 2015.

The finance costs for the first quarter of 2015 also included PLN 4.2 million of arrangement fees incurred on the origination of the previous loan, which are deferred over the period of the loan by accounting for interest on the loan using the effective interest rate.

In the first quarter of 2015 the Group’s financial expenses, the bulk of which resulted from interest on the loan drawn on the basis of the loan agreement, amounted to PLN 10.8 million. The amount of these costs in consecutive periods will to a large extent depend on the rate of the 3M WIBOR which was 1.65% as at March 31, 2015.

Apart from the factors referred to above during the three months ended on March 31, 2015 there were no extraordinary factors or events which would have a significant impact on the financial results achieved.